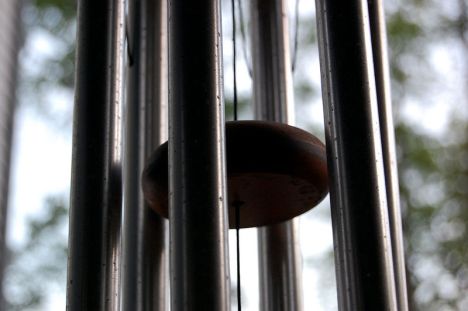 The wind chimes on television
seem so beautiful,
sound so soothing.
But I had a wind chime
that never made a sound.
There was never a wind around my house
at least not the one that pleased my wind chimes.
The occasional wind will touch my cheeks
but never the edges of the shining metal.
It never made the song that I longed for.
It made me feel
that my life was more stagnant
than it really was.
The only time it made a sound
was when my hands played with it.
But it was tiring
and it never quite sounded the same.
It never sounded like
the wind chimes on television.

Hi, I am Nayana Nair. I'm 28. Just a person who has tons of things to talk about....not much organized thoughts sadly. I'm interested in all forms of storytelling (though I don't have the talent for it). So I like series, movies, novels, anime, and whatnot. I'm also really passionate about music, psychology, learning languages (I just dream big, too undisciplined to makes any actual progress) and literature. I am overall just a curious person who is interested in all kinds of things, as long as they suit my taste. I always wanted to be a writer (and also a teacher)..But I don't think I have the skills required...this blog is just my attempt at becoming the writer I always wanted to be...Blogging for few years, I have realized I am more of a poet (although, I am not sure that I am good enough for that label)...I hope I realize more about myself through writing. Thanks for dropping by!! Hope I didn't disappoint. :) View all posts by Nayana Nair